A Bridge is Born 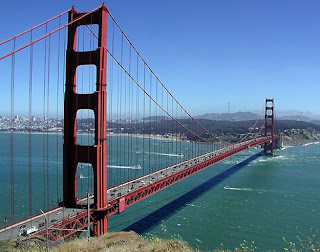 On January 5, 1933, work started on the Golden Gate Bridge in San Francisco, CA. Ideas for a bridge spanning the narrow entrance to The San Francisco Bay had surfaced just after the California Gold Rush of 1849, but engineering challenges delayed the project. In the mid-twenties two engineers came up with a proposal that was simple yet daunting: a pure suspension bridge with a center span of almost 4,000 feet. By the time the work was ready to begin, the Great Depression had begun and the project stalled. San Francisco based Bank of America stepped in and bought all the 30 million dollars in bonds to help the local economy. The bridge opened in May 1937, with over 200,000 people walking, riding, and even roller skating across the span. With its tall towers and red paint job, the bridge quickly became an American landmark and a symbol of San Francisco.

I love bridges. I collect books about them, I read many more, and I'm fascinated by their engineering and beauty. My favorite is the Brooklyn Bridge ( I'm going to be in NY this weekend, and I hope to get a chance to see it). The Golden Gate Bridge is also a favorite. Bridges represent the dynamic tension of a pure engineering and ascetics. It's no big challenge to build a functional bridge - they have been around for thousands of years. But to build one that works, and is a work of art, that is a special talent.

The purest purpose of a bridge is to get from one place to another, usually overcoming some obstacle. Leaders are bridges, too.
How are you building bridges in 2009?
Posted by Bob Adams at 6:17 AM

Email ThisBlogThis!Share to TwitterShare to FacebookShare to Pinterest
Labels: bridges