A unique set of circumstances over the weekend led me to post on the 2007 movie "Amazing Graze":

If you haven't seen it, I strongly recommend you purchase it and view it with your family - and view it again at least once a year.

Even with a little literary license, it accurately reflects the life and struggles of William Wilberforce and his 40+ year fight against slavery in the British Empire. Central to the movie is the character of John Newton, the former slave ship owner who became convicted of his sins and wrote the hymn we now know as Amazing Grace.

I close with one of the most powerful quotes of the movie, by John Newton:

Although my memory's fading, I remember two things very
clearly:

I'm a great sinner and Christ is a great Savior. 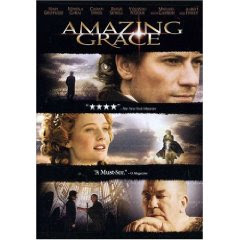