Christianity Has an Image Problem 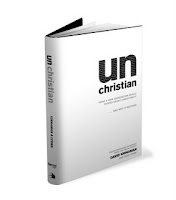 Using the lens of careful, scientific research that the Barna Research is known for, "unChristian" is an invitation to see what Christianity looks like from the outside. The title of the book reflects outsiders’ most common reaction to the faith: they think Christians no longer represent what Jesus had in mind, that Christianity in our society is not what is was meant to be. They admit they have a hard time actually seeing Jesus because of all the negative baggage that now surrounds Him. Research of the topic revealed six most common points of skepticism and objections. It was my privilege to hear author Gabe Lyons speak at the 2008 Church Solutions Expo and again at the Catalyst Lab. Here are the six broad themes of the book:

1. Hypocritical – Outsiders consider us hypocritical – saying one thing and doing another – and they are skeptical of our morally superior attitudes. They say Christians pretend to be something unreal, conveying a polished image that is not accurate. Christians think the church is only a place for virtuous and morally pure people.

2. Too focused on getting converts – Outsiders wonder if we genuinely care about them. They feel like targets rather than people. They question our motives when we try to help them “get saved,” despite the fact that many of them have already “tried” Jesus and experienced church before.

3. Antihomosexual – Outsiders say that Christians are bigoted and show disdain for gays and lesbians. They say Christians are fixated on curing homosexuals and on leveraging political solutions against them.

4. Sheltered – Christians are thought of as old-fashioned, boring, and out of touch with reality. Outsiders say we do not respond to reality I appropriately complex ways, preferring simplistic solutions and answers. We are not willing to deal with the grit and grime of people’s lives.

5. Too political – Another common perception of Christians is that we are overly motivated by a political agenda, that we promote and represent politically conservative interests and issues. Conservative Christians are often thought of as right-wingers.

6. Judgmental – Outsiders think of Christians as quick to judge others. They say we are not honest about our attitudes and perspectives about other people. They doubt that we really love people as we say we do.
"unChristian" is a fascinating study that reveals why the negative perceptions above exist, but more importantly, gives us clues on how to reverse these perceptions.
Posted by Bob Adams at 6:00 AM