The Inverse Law of Weather Prediction

Somewhere in the Meteorology 101 is a law that reads something like this:

The actual amount of snow received in a given
area is the inverse of the amount predicted.

Children hate that law; adults (especially those responsible for property management and life safety) love it. In Charlotte, the news begin murmuring Sunday about the possibility of some precipitation by Monday afternoon. In the South, the word precipitation always means snow or ice. By Sunday night, the murmurings became news: Charlotte Prepares for Wintry Blast. By Monday, it was not only a certainty, but the predictions first became specific, then increased:

1-2" of snow; no, 2-3"; no, really 4-6" of snow. By now, it was BIG time news: a bona fide Winter Weather Advisory for most of NC. It was to start as rain in the late evening, begin turning to snow around midnight, and accumulate throughout the day, ending around noon with depths of 4-6" in the Charlotte metro area, with more (or less) in surrounding areas. 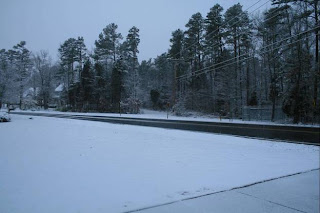 The kid in me wanted it to snow a lot, even though I had to drive to Winston-Salem. The rational adult (there is a sliver of that in me somewhere), plus the knowledge that my property manager wife didn't want it, hoped for no snow.

The result: all of the above, in some manner or form. Depending on where you lived in Charlotte, you received from nothing to over 3" of snow. As I traveled northeast to Winston Salem early this morning, it was colder, and they had more snow - and ICE.

Around 7:30 AM I got to channel my favorite NASCAR driver when a car in front of me realized they were on black ice and slammed on their brakes. Even though we were going only about 45 or so, and there was a good amount of distance between us, I knew I wasn't going to be able to stop. I quickly shifted to 1st, then 2nd, went into a controlled spin toward the median, did a 180 and steered backwards toward the grass. When my wheels touched the grass I applied the brakes, came to a stop, and then calmly turned back in the right direction and continued on my way. The rest of the trip was uneventful for me - but not for the dozen or so vehicles I saw on the sides of the road.


Anyway, to bring this to some semblance of a conclusion: the weather people have loads of gear and data to support their predictions - and they can be wrong most of the time and still be thought of as successful. Why? Because the weather, in spite of our increased knowledge, is still largely beyond the grasp of predicting with any accuracy what will actually happen.


John 3:8 speaks of the Spirit as wind; both the Hebrew and Greek words for spirit can be translated as "wind". Wind, or generally speaking "weather" is largely beyond our control - but we are subject to its power. We see the action of weather, we can plan for it's potential result, but in the end it is beyond our control. The weather always presents itself in great variety: it may be snowing in one place, but 3 miles away it is not. It can be 24 degrees here, but 33 degrees there.


So, like the weatherperson, we can try to predict the weather, but ultimately we are subject to what it will do on its own.

How many times have we been guilty of trying the same thing with the Holy Spirit? Have you made your plans and asked God to bless them with His presence? Or, are you humbly seeking God and letting His powerful Spirit direct you?
How is the Spirit directing your life today?
Posted by Bob Adams at 10:46 AM