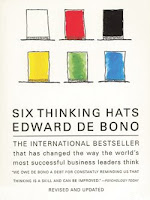 This scenario has been repeated thousands of times, maybe in your organization this week: You are facing a big problem. A decision made months ago has now caused sharply declining results. A big meeting has been called, and all the staff enters the conference room with something different on their mind.

Your R&D department has an armful of charts, research, and data depicting the path of the project. The creative department has sketched up a new campaign that improves the message. The marketing manager is unsure if he will be around after the meeting. And the office manager smugly recalls how she suggested it was a bad idea to begin with.

The meeting quickly turns into a discussion that even more quickly becomes an argument about whose perspective has more merit. Each person’s emotional attachment to their point of view and their verbal commitment to their position makes considering other options difficult. The team leader knows that the way through the impasse is to consider a wide range of options.

To move just such a discussion forward, Edward De Bono, in “Six Thinking Hats,” delineates six clear directions, or hats, that represent a particular line of human thought. To each hat he assigns a color, and just like the hat, one puts on that line of thinking to consider the problem at hand.


Six Hats thinking allows participants to focus their energy in a specific direction by getting everyone to “wear” one hat at a time.

DeBono rightly states that “the biggest enemy of thinking is complexity, for that leads to confusion.” His six hat method of discussion allows the exploration of a topic in a natural and objective manner. The conversational method makes the material easier to internalize and apply. It is an effective way to organize your meetings so that they actually initiate progress rather than create more roadblocks.

I’ve been able to use Six Hats thinking to help groups step back from an emotionally-charged issue and approach it from a rational, thinking direction. In every case, the results have been simply amazing. Most people have the capacity to look at a situation in a different perspective. It only takes a leader to help them find the right “hat” to wear in the discussion.

Have you tried being a hat-maker lately?