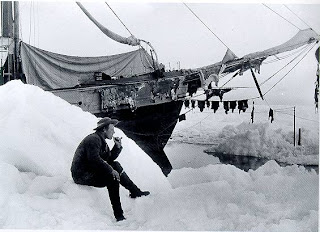 Fridtjof Nansen was a Norwegian explorer who had personal dreams:

He planned to continue on with his dreams of exploration, but with the onset of WW1, funds for exploration were diverted elsewhere. Nansen now found himself in opportunities of global impact that he could have never dreamed possible. God's dream for his life was much bigger than Nansen's dream! As a result of this redirection, he:

What dream are you passionately pursuing? Dreams change you, they change others, and they change the world. If you don't have a dream that causes you to be dependent on God...you have not yet rediscovered the dream God has for you!

My friends at Community Christian Church in Naperville, IL helped start my Catalyst experience three weeks ago with the story of Nansen. They outlined 7 steps to Discovering Your Dream. Your dreams start with identifying a "God-sized thing" that is calling you to a bigger vision than you've ever had before.

I have no aspirations of being an Arctic explorer...but I feel a God-sized dream forming in the midst of the future.

Email ThisBlogThis!Share to TwitterShare to FacebookShare to Pinterest
Labels: Dream