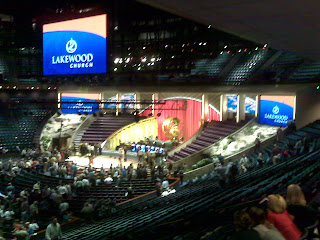 We ended WFX Day 2 at Lakewood Church in Houston where Joel Osteen is pastor. The church is located in the former Houston Rockets arena. After a year of negations with the city, 22 months of renovations with a price tag of $80 million dollars, Lakewood Church hosts over 40,000 people per weekend on site and several million more through television broadcasts, podcasts, and special programs. From a church builder perspective, it was certainly breathtaking: the conversion certainly reminded you of what it used to be, but after sitting on the main floor for an hour video tour and Q&A with the pastor and staff, it certainly didn't feel like a sports arena. Osteen's background (he served for over 15 years as producer of his father's broadcast ministries before assuming the pastorate in 1999 at the elder Osteen's passing) certainly contributed to the unique setting of the staging, sight lines, and audio/visual enhancements. The children and student areas were very impressive, catering in a very age appropriate manner to the kids who would be there. I may not agree with Osteen's theology at times, and the whole atmosphere seems a little too much "Hollywood" for me, but Lakewood certainly takes the professionalism and excellence of its facilities to impressive levels.

A wonderful supper preceded the Lakewood Experience-my table guests included the staff of the EPA's congregational division (finally-a good use of my taxes!); the editor of Worship Facility magazine; the executive director of the National Association of Church Facility Managers; and the NACDB administrator.

The expo floor opened at 11:30, and I worked the NACDB booth from opening till it closed at 5:30. Around 4 PM I realized I had been on my feet since 6 AM, and was glad that the booth next to ours was a theater seating company! I tested their product out for about a half hour.

The keynote presentation of the morning was by Dave Ferguson, lead pastor at Community Christian Church in Naperville, IL. He talked about lessons that make innovations work:

Ferguson closed by standing on the edge of the stage and saying we should:

Ferguson's group also presented "Discover the Dream" at the pre-Catalyst sessions in early October. Here's my post and thoughts then. Ferguson and CCC are leaders in the multi-site movement and a new branch, reproducing churches. Pay close attention to what they are about!

The 9:15 session-Developing a Creation Care Audit for your Church- went pretty well. My main case study was Northland Church in Orlando, who did a fantastic job in their audit process last year. Some of their team was on site, and added a lot to the conversation.

My 8:00 session started off a little rocky-the AV contractors for the convention center did not have any of the video projectors set up. I told the group we were going "old school" and they would have to listen carefully. Luckily, the AV techs showed up about 5 minutes later and we were up and running my 10 after. The topic-Build the Team BEFORE the Building-has become one of my favorites. I'm constantly tweaking and adapting it for use with church clients. I will be presenting it at the Church Solutions Expo in February, but it will be completely different in presentation style. Stay tuned for an update on that!

I began the day with an Early Bird round table discussion on green church issues at 7 AM - the one brave person who came and I had a great conversation about her church project in CA.

So that's how my Day Two at WFX went, from last to first. But the most exciting thing happened on the expo floor late in the day, and I'm saving it for tomorrow.