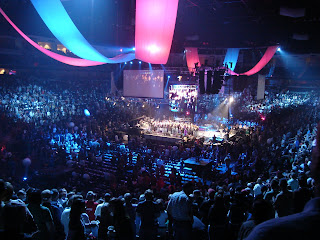 Though it's hard to pick a favorite from the tremendous lineup of speakers at Catalyst, Seth Godin has to be right up there at the top. He's long been one of my favorite authors, and his blog is one of my daily reads. For a little more details on his presentation to Catalyst, take a look at my blog at Church Solutions here. His latest book, Tribes, has a powerful message for church leaders-of all ages-that needs to be heard. Tribes want to:

Craig Groeschel made a few comments about his latest book, it, saying that churches and leaders should have it:

Random observation #1: Some of the loudest, longest, and most heart-felt cheers came for an Army Staff Sergent, who chose to spend 3 days of his 15 day leave at Catalyst. He just wanted to learn more before he went back to his post in Iraq. He and his wife were showered with tremendous applause and a long, standing O. Catalyst guys raided the resource center and made sure that had a ton of stuff to take back.

Andy Crouch, speaking about culture, observed that we often:

Instead, God asks us to:

Matt Chandler speculated that if church leaders have been at their churches longer than 4 years, where your church is weak is where you are week.

We need to learn how to contextualize-learn how to say deep things in understandable ways.

I'll be posting some final observations from Catalyst later tonight.