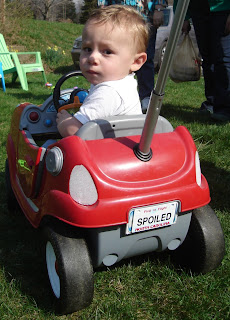 My grandson Jack is a typical boy - anything with wheels fascinates him.

On the other hand, one of his favorite toys is an old cell phone belonging to his parents. He's always carrying it around, making calls.

When he gets a little older, a phone may just be the device that turns our educational system upside down.

Anya Kamenetz is the author of the new book "DIY U: Edupunks, Edupreneurs, and the Coming Transformation of Higher Education." A recent Fast Company article highlighted possible coming changes.

Mobile Phones have transformed communications around the world more swiftly than anyone could have imagined. The prospect of doing the same for education is a tantalizing - and troubling prospect.

The same possibilities that make these technologies so exciting make them threatening to the educational status quo. A system built around tools that allow children to explore and figure things out for themselves would be radical for most developing-world schools, which emphasize learning by rote. In the US, which is currently fixated on state curriculum benchmarks and standardized tests, it could be just as hard a sell.

The challenge of putting the kids into the educational driver's seat is so daunting it's almost unimaginable. Until you see a small child eagerly embrace a device that lets him write, draw, and figure out math problems. All of a sudden, maybe it's not just a dream anymore.

Here's one GrandBob that is hoping that's true.