Got Your Thinking Hat On?

Thinking is the ultimate human resource. Yet we can never be satisfied with our most important skill. No matter how good we become, we should always want to be better.
-Edward de Bono

Dr. de Bono is an internationally acclaimed authority in the teaching of thinking as a skill. I've posted on his most famous book, The Six Thinking Hats, here. In this week's ongoing discussion of thinking, I wanted to revisit his work briefly.

In "Six Thinking Hats" the author presents a simple but effective way to become a better thinker. He separates thinking into six distinct modes, identified with six colored "thinking hats":


"Putting on" a hat focuses thinking; "switching" hats redirects thinking. With the different parts of the thinking process thus clearly defined, discussions can be better focused and more productive.
There are two main purposes to the six thinking hats concept. The first purpose is to simplify thinking by allowing a thinker to deal with one thing at a time. Instead of having to take care of emotions, logic, information, hope and creativity all at the same time, the thinker is able to deal with them separately.
The second main purpose of the six thinking hats concept is to allow a switch in thinking. If a person at a meeting has been persistently negative, that person can be asked to take off "the black thinking hat." This signals the person that he has is being persistently negative. A person may be asked to put on "the yellow thinking hat;" this is a direct request to be positive.
By referring to the color of the hat instead of the emotion or perceived style, the concept of the hats minimizes the impact on a person's ego or personality and allow for the possibility of focusing on one thing at a time - instead of trying to do everything at once. 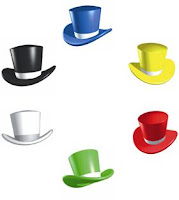 Got a tough meeting coming up?

Make sure you carry six hats in!