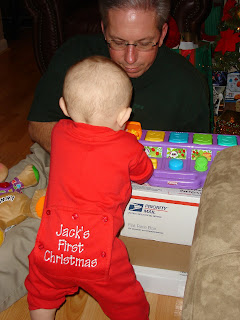 Jack's first Christmas at GrandBob and Nina's has come and gone - much too quickly from our standpoint! The last 24 hours have been quite a whirl as Jon, Hallie and Jack came in from Boone and Jason and Jaime came in from West Virginia. After a quick supper last night, we went to see the Singing Santa (see earlier post). Jack wasn't scared at all - but he was fascinated by all the lights. Who knows, maybe we have another AVL tech in the making!
Now it's late on Christmas Eve, but our Christmas was all day long. Continuing a long tradition, we celebrate our family Christmas whenever we can all get together. It has been as early as 12/21 and as late as Christmas Eve, like this year. Anita and I decided long ago that we would reserve a full day at least for our kids (and eventually their kids) before we made the journey to Tennessee to see our parents and extended family. In spite of the gyrations it sometimes causes, we're glad we made that decision. Maybe this one picture illustrates it best. That's Jack (cool jams, Mom!) playing with one of his toys (from Uncle Aaron - well-tested at the store). The impromptu table is made up of three boxes that Granny sent for Jon, Hallie and Jack. My job? Just hold on to the back of the toy so Jack can play away!
The toy is a variation of one that's been around for decades - 5 animals that pop up when you push a button, turn a knob, or flip a switch. Jack was first attracted to the colors of the animals, but within a few minutes he figured out how to push the animals down. It was my job to make them pop up, but he learned how to make them go down. He was a quick learner (what else is a grandfather supposed to say?). He did it with support and encouragement from me, but it was mostly his curiosity and determination that made it work. The excitement and pure joy of a nine-month old is a special moment to treasure.
It was a very special day all the way from an early beginning through a late night. Now it's time to pack up and get ready for an early Christmas drive to Nashville TN to see grandparents, aunts, uncles, cousins, and assorted friends. It will be good, but today was great.
Thanks, Jack, for making my Christmas day! It was your first Christmas, but it was a special one for me too.
Posted by Bob Adams at 9:12 PM